//
you're reading...
Cleansers: An Overview

As discussed in the previous section about the types of cleansers and how they are characterized, true soaps exclusively use one family of surfactants: alkyl carboxylates, which are basically (alkali) salts of fatty acids. While the most common one is sodium stearate, there are many out there. In order to know which ingredient is a soap, you need to be able to recognize what an alkyl carboxylate looks like on an ingredients list. 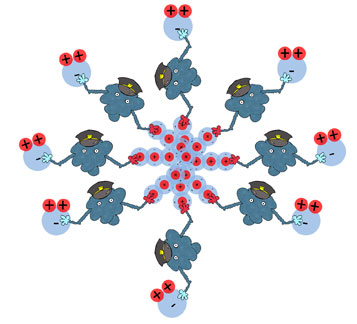 Surfactants really know how to bring everyone together!

Keep these points in mind:

With that out of the way, we can now explore the plethora of surfactants that are commonly used in liquid cleansers, some of which are also used in syndet cleansers.

There are four types of surfactants, which are grouped by the charge of their head groups–something that determines a compound’s interactivity. The carbon chains or backbones are almost always non-reactive. They four types are: anionic, cationic, amphoteric, and nonionic.

The surfactant types in decreasing order of potency are as follows: anionic = cationic > amphoteric > nonionic. Note that this is only a trend, rather than an absolute rule.

Anionic surfactants have an overall negative charge and lather well. Examples of anionic surfactants include the alkyl carboxylates (yes, soaps are anionic surfactants), ammonium lauryl sulfate, and sodium laureth sulfate. Note that in this case, the identity of the first word typically suggests form, while the second and third words (if there are any) infer function. For example, sodium lauryl sulfate and ammonium lauryl sulfate are equally stripping (function), while the former is less soluble in water than the latter (form)–something that the formulators can compensate by for example, altering the amounts/types of solvents and colorants used. But that difference doesn’t meaningfully affect how well the surfactants remove oil, makeup, and debris from the skin.

A true soap: sodium stearate is also an anionic surfactant.

Isethionates, phosphates, sulfosuccinates, and sulfonates are also anionic surfactants.  Obviously, other sulfates are also anionic. Keep in mind that anionic surfactants represent the most populated and varied group of surfactants. They are varied in the sense that they exhibit widely different degrees of potency. For example, sulfates and sulfonates are significantly more potent than isethionates. Furthermore, newfangled amino-acid based surfactants such as the gluatames, sarcosinates, and glycinates are even more gentle.

Note that there is no research demonstrating that sulfates are carcinogenic. So, rest easily. If anything, I’d venture to guess that a more likely source of sulfate-related carcinogens would come from the byproducts of the production process, rather than from the actual sulfate compounds themselves. But even if that were to be true, the amounts produced would be miniscule or even infinitesimal. Remember, poisons/toxins/carcinogens are dose-dependent (like most things).  And really, if you need to worry about a source of carcinogens, worry about the sun. Or overcooked meat and complex carbohydrates. Or smoking…

Cetrimonium bromide (a cationic sufactant) is used more for its antibacterial rather than cleansing characteristics.

Cationic surfactants are used less often than anionic ones because:

Sodium lauroamphoacetate is an amphoteric surfactant.

Okay, that was a pretty long tangent. Let’s take it a step further? Guess what rhymes with zwitter? Twitter! Lame, I know.

Notice how decyl glucoside has no electrical charge in its head group? That makes it a nonionic surfactant.

When I originally brainstormed how to structure this post, I planned on giving a brief overview of each family of surfactants (i.e. sulfates, sarcosinates, etc.). However, I ultimately decided against that because it’s far too provincial to only look at the surfactants in a cleanser when evaluating if one is appropriate for your skin type. Furthermore, it over-complicates things; there are just too many exceptions to any rule or methodology that can be conceived. For example if I were to say that sulfates were the most potent, I would have to make a distinction between sodium lauryl sulfate and sodium laureth sulfate. And while sulfonates tend to be less potent than sulfates, sodium C14-16 olefin sulfonate is more potent than sodium laureth sulfate. Therefore, I’d have to write an asterisk there or something. If done this way, I’d basically have asterisks everywhere, which pretty much defeats the purpose of having a ranking system.

The only ranking system that would be valid is if I were to rank every individual surfactant in order. I would have to find out each surfactant’s CMC. To the best of my knowledge, there is no publicly-available all-inclusive database with this information. Furthermore, a surfactant’s CMC may not even be entirely responsible for a surfactant’s potency. Recent studies suggest that micelle size, surfactant length, and several other aspects can also affect potency. Not to mention there are different ways to measure CMC; each method has its pros and cons. However, newer methods of determination may simplify and provide more consistent answers in the future.

It’s a micellar reference! LOL, get it?! I know, NERD.

Still, even if such a database were to exist, it would be an incredible waste of my time and yours to put much faith in it, since so many other aspects including the concentrations of the surfactants, emollients and humectants used; as well as an individual’s skin type and skin care routine, etc… will affect the final outcome. Nit-picking and meticulousness are not virtues in this situation.

Therefore, the purpose of this post is to act as a reference of sorts, and to help you understand some of the terms and misconceptions that are thrown around in the dermatological blogosphere. You shouldn’t really concern yourself with what surfactants are present in a cleanser, except when it is close to the front of the ingredients list or if you are sensitive to one or more of them. I admit that on a theoretical level, cleanser evaluations are the least reliable. It’s why I don’t like reviewing cleansers. Consequently, I will NOT be recommending a list of cleansers at the end of this series. Fear not however, there will be a general article that discusses how to choose an appropriate cleanser (LINK) at the end of this section/series.

The Triple Helixian is an unbiased science and research-based site that attempts to clarify and elucidate questions about skin care, while aspiring to be the most thorough and complete source of information.
View all posts by John »
« Cleansers: Types and Composition
Cleansers: Short-Term Effects »

2 thoughts on “Cleansers: Types of Surfactants”

I have something to say too... Cancel reply

Pick a topic, and go!

A Trip Back in Time

Unauthorized use and/or duplication of this material without express and written permission from this blog’s author and/or owner is strictly prohibited.