Should L-Ascorbic Acid and Glycolic Acid Be Used Together?

A while back, several readers brought this article to my attention. In it, the author Dr. Cynthia Bailey states that, “… vitamin C and glycolic acid can’t both be on the skin at the same time anyway.” The readers wanted to know if there was any truth to this statement.

Is There Any Evidence of a Negative Interaction?

Honestly, I have no idea why Dr. Bailey would say that. There is absolutely no documentation that supports her claim. Furthermore, when she responds to the various people asking her about it, she doesn’t show any evidence nor explain WHY they can’t be used together. I can think of no reason why they can’t be used together, except for the fact that some glycolic acid (GA) products are formulated with a pH above 3.5; they don’t typically go above 4.0 however.

Now, a pH of 3.5 or less is recommended for L-ascorbic acid (LAA) to properly penetrate into the skin. However, that number isn’t absolute. The diction makes it sound like a product with a pH of like 3.51 would be completely useless. And that’s not true at all. LAA is like any acid; it obeys all the same rules; most importantly that the rates of dissociation arenot linear by any means. In fact, the acid dissociation constant (pKa) of LAA’s is 4.17, which is higher than GA’s pKa of 3.83, meaning that it actually takes a less acidic pH for a given percent of GA to dissociate and function in comparison to the same percent of LAA.

If that’s not enough to ease your doubts, consider this: 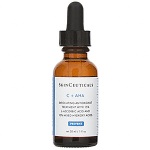 Dr. Bailey quotes, “L-ascorbic acid requires a pH of 3.5 or less to penetrate the skin.” That fact was taken from studies done by the people behind the brand Skinceuticals, including this one on on vitamins C, E and ferulic acid. Now, if LAA isn’t compatible with GA, why in the WORLD would Skinceuticals include a product that contains BOTH ingredients?! Clearly, they can be used together.

Like with anything, just make sure not to irritate the skin. When using LAA and GA together, that may increase chances of irritation. But keep in mind that irritation is a very personal thing; it will vary from person to person. Oh, and this applies to using LAA with other hydroxy acids like salicylic acid.

***Note that If this information looks familiar, I did talk about this rather extensively in replies to the same readers that mentioned this issue. But I figured that I’d make this a post so more people will see this.

The Triple Helixian is an unbiased science and research-based site that attempts to clarify and elucidate questions about skin care, while aspiring to be the most thorough and complete source of information.
View all posts by John »
« Does Petrolatum Enhance UV Light?
Have you found that water-based products are more effective than oil-based ones? »

14 thoughts on “Should L-Ascorbic Acid and Glycolic Acid Be Used Together?”

I have something to say too... Cancel reply

Pick a topic, and go!

A Trip Back in Time

Unauthorized use and/or duplication of this material without express and written permission from this blog’s author and/or owner is strictly prohibited.